"In their hands rests the greatest power for good and evil!" Women Voters and Mount Holyoke College in 1920 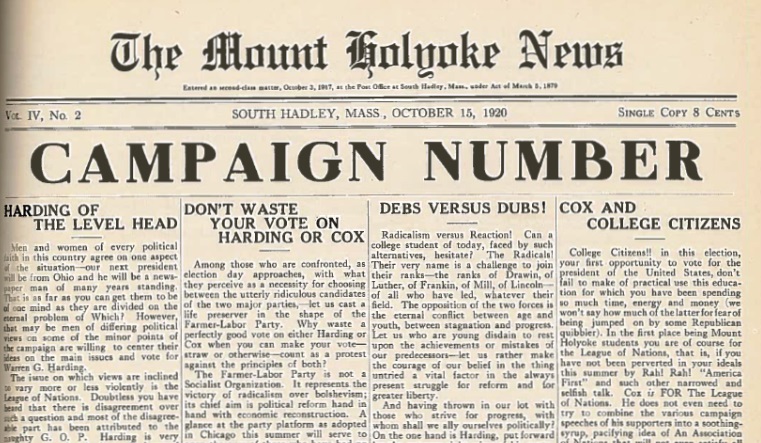 ...The year was 1920. Children could no longer be sent as parcels via the U.S. postal service; Sacco and Vanzetti were arrested on charges of robbery and murder amidst the post war Red Scare; Babe Ruth was traded to the Yankees; and on November 2, for the first time in United States history, women voted in national elections.

As an article printed in the Mount Holyoke News noted, “There are 23,000,000 new voters – the largest body of new voters the world has ever known – and in their hands rests the greatest power for good and evil.” With that said, by the start of fall semester 1920, the elections were in full swing and the candidates for each party had been selected. For the Republicans: Warren G. Harding; for the Democrats: James M. Cox; and (lest we subscribe to a two party system) Eugene V. Debs for the Socialists and Parley P. Christensen for the Farmer-Labor Party.

Other articles in the News that fall also mirrored the excitement on campus, and columns throughout October and November were dedicated to the election. In the edition published on October 15, the first pages were given over to answering in detail the question of which candidate should you vote for. Among the student opinions we have are: “Harding of the Level Head,” “Don’t Waste your Vote on Harding or Cox,” “Debs Versus Dubs,” and “Cox and the College Citizen,” in favor of Harding, the Farmer-Labor Party, Eugene Debs, and Cox respectively. Each informs its readers of the valor of their chosen candidate and the misdeeds of his opponents. With all this information available, a column published in the following week’s paper speaks the truth when it says, “if any student fails to vote on Election Day because she did not know anything about the candidates, it will be entirely her own fault. Information is to be had for the looking—in any direction.”

Student Ruth Walton, Mount Holyoke Class of 1922, wrote a letter home on November 7, 1920, describing in detail to her parents the excitement felt during the weeks leading up to and on Election Day:

… We had quite an exciting time over the election. You know we were to have a big parade and bonfire for election night, but it rained, so we all gathered in S.A.H. and they brought in our results. They had the college wire connected with western union so we got all the news as it came in. It was the most exciting meeting really. I never heard so much noise in my life! Of course not every report favored Harding… there seemed to be quite a few for Cox, from the fourteen states etc. and when we were told, we were still rather doubtful because we thought about the [previous election]. We were allowed to stay up until 12 o’clock, which I think was really good of the dean and so after the meeting we had a fudge party. The college straw vote went for Harding… Among the faculty… they were for Cox and the League… Only a small majority of the faculty who could have voted did and I think that it is awfully [feeble] of them not to vote if they had a chance.

After this, her handwriting gets progressively worse and conversation turns to the beautiful weather.

Today while the weather might not be as beautiful as Ruth describes it, as we go into [the next] election I ask only that you remember the words of the October 15, 1920, Mount Holyoke News: “Don’t forget that progress is the purpose of education and we, being educated women, should do everything in our power to foster it. The greatest thing that has been accomplished in the last year has been the extension of the right to vote to women.” So, in the name of our fore-sisters and the right they were so excited to exercise all those decades ago, go forth and vote!