Despite our current frigid temperatures, spring is around the corner, and for baseball fans the opening of Major League Baseball's spring training provides assurance that summer is indeed coming soon. Baseball has a long history at Vassar College, and our Digital Library contains some tantalizing details about how the sport was played here. College Women will be adding to the story as more diaries and letters are uploaded, but there are already several photographs available about the sport.

The first mention of a baseball game at Vassar comes through a letter that Annie Glidden (VC 1869) wrote to her brother, John, in April 1866:

They are getting up various clubs now for out-of-door exercise. They have a floral society, boat clubs, and base-ball clubs. I belong to one of the latter, and enjoy it, hugely, I can assure you. Our ground was measured off this morning. We think, after we have practiced a little, we will let the Atlantic Club play a match with us. Or, it may be, we will consent to play a match with the students from College Hill: but we have not decided yet. [1] 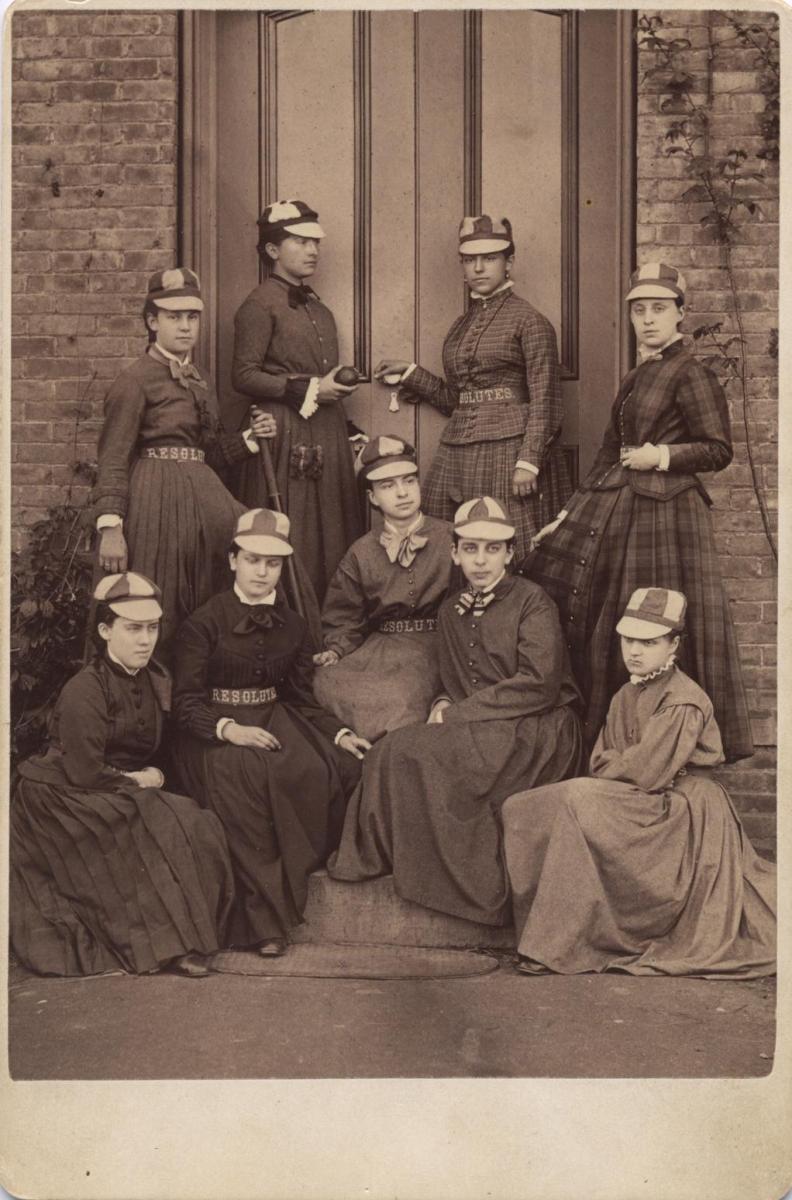 As historian Debra Shattuck chronicles, Glidden was a member of the Laurel and Abenakis Base Ball Clubs, and she and the other twenty-two classmates who participated "...were among the first women baseball players in the United States" [2]. The popularity of the sport was striking: prior to attending Vassar, students had often learned that physical activity would jeopardize their studies, health, and reputations in polite society. (We don't know his reaction, but it's possible that Glidden's brother was aghast at her interest in baseball!) To counter this belief, College administrators created model physical training programs to improve the health and well being of their students. [3] Our Student Diaries and Student Letters collections are filled with stories of hiking at Lake Mohonk, club sports, and the benefits of exercise in general. As Nettie DeWitt (VC Ex-1896) wrote to her brother in October 1892, "You ought to come and visit me in the winter. Right across the road from the college grounds is a nice pond. In winter they skate there a great deal. Won't it be fine? And they coast here too, and have lots of sport. I will get in more exercise than I do at home almost" [4]. College physician Helen Northing Webster encouraged students' physical activity, even calling on athletes to play through their injuries [5].

Baseball's popularity at Vassar waxed and waned through 1875, when The Vassar Miscellany asked, "Could base ball clubs be called improvements [on campus life] or the reverse?" [6] A June 1876 picture of Vassar's team, The Resolutes, serves as a reminder that the club members were still interested in playing, though the sport's popularity suffered an overall decline. Until 1909, there seems to be no evidence that students organized teams, though there was the somewhat popular "baseball throw" at Field Day competitions starting in 1895. [7] But the 20-year hiatus provided the opportunity for faculty and students to join forces in their love for baseball. In 1917, the Faculty-Student Founder's Day baseball game began. By June 1920, Misc editors noted that the "excited audience" had lots of fun at "...the Faculty-Student baseball games for which Founder's Day is famous" [8].

The Founder's Day game was played through the 1960s, but by 1976, baseball seemed to be waning again on campus. A January 1976 Misc article noted that only three students were interested in creating a team to play at Prentiss Field, and it is unclear if any emerging baseball teams were going to be all male, all female, or coed. [9] Though baseball's popularity declined, other sports surged: once Vassar became coeducational in 1969, the number of teams fielded and variety of sports increased, and a formal relationship with the NCAA was established. [10] Additionally, there were coed softball teams on and off again from the 1970 until at least 1995, and the Archives and Special Collections Library's subject files have references to these teams. But baseball itself never did go away: the College joined the NCAA's Division III for baseball in the 1980-1981 season, and though there is no record  -- at least digitally -- of any female club teams, there have been more than 30 years of men's baseball teams. Interestingly, there was one point when the team was coed: outfielder Lilly Jacobson (VC 2010) was the only female player on Vassar's baseball team from 2008-2010. [11]

While it's still too chilly perhaps to play baseball ourselves, it's the perfect temperature to read more about baseball at Vassar and the other institutions in College Women. Shattuck's excellent article on baseball and higher education in particular, and her book about women in baseball in general, provide a wonderful narrative on the social history behind the teams. And while our digital collections provide insight into past and present baseball trends at Vassar, much more is waiting to be discovered -- perhaps by a current or future scholar that is, of course, a baseball fan.