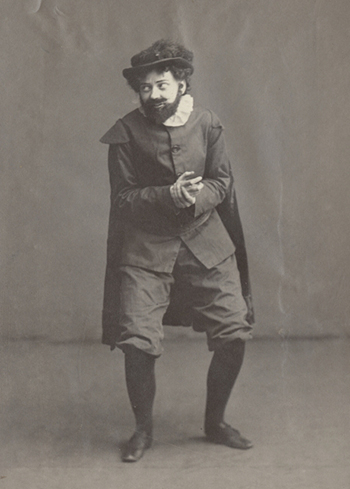 Digitization and metadata creation are in full swing here at Smith!
I have recently been working with the collection of Marjory Gane, class of 1901. Among her many extracurricular interests (including basketball and violin), Marjory enjoyed participating in "House Dramatics."
During the spring of her Junior year, Marjory performed in Nicholas Udall's play, Ralph Roister Doister (see photo above), a comedy from the 1550s about the wooing of a rich widow, with other classmates from Hubbard House.
On April 20, 1900 Marjory writes: "We had the dress rehearsal last night - It didn't go very well. But then, I suppose they never do. I shall have lots to tell you next Sunday. ... The play occupies all our minds all the time, nearly - it will be over to-night." (Gane, Apr 25, 1900) She sends three pictures home a few days later. (Gane, Apr 29, 1900).
Elizabeth Crocker Lawrence Clarke, class of 1883, sheds some light on the origins of House Dramatics in her chapter on "Student Life" In L. Clark Seelye's "The Early History of Smith College: 1871-1910." She wrote that as early as the second year of the college, the first two dramatic performances were given: The Captives by Plautus and Twelfth Night by William Shakespeare. "Probably the first of the two was Twelfth Night, which was given in the parlors of the Dewey, and ladies from the town were invited." (Clark, 1923, p.184) The actress who played Malvolio wrote: "I remember that I was at much pains to procure a pair of yellow stockings which you remember figure prominently in Malvolio's costume, decorated by the renowned cross-garters. I could find no yellow stockings in town, and so bough a pair of white ones and dyed them myself with aniline dye. Having had no experience, I dyed my hands as yellow as the stockings." (Clark, 1923, p.184). Clarke tells us that the Class of 1879, having read The Captives of Plautus, gave a representation of the play in English in the Dewey parlors "in lieu of an examination." (Clark, 1923, p. 184)
So, why "House" Dramatics? In the early days of Smith College, a new house had to be built each year to accommodate the next incoming class. A member of the Smith class of 1881 noted that at this time "Class feeling was strong and was emphasized by the divisions made by the houses." (Clark, 1923, p. 186)
The Class of 1883 even appointed their "prettiest ambassadress" to ask the College President's permission to have dramatics during the week of their Commencement. Though President Seelye did not want to set a president for Senior dramatics, the ambassadress suggested that: "If a few individuals went to a private house and had an informal little play, there could be no objection to their parents' witnessing it, could there?" President Seelye smiled and yielded the point. (Clark, 1923, p. 196)
College theatricals were important to the other early women's colleges as well. Helen Lefkowitz Horowitz in her book "Alma Mater" noted that college women often enjoyed wearing costumes as casual attire, as clothing such as modified bloomers freed their movement. (Horowitz, 1984, p. 162) Horowitz (1984) wrote that  "Three areas dominated official campus life: organizations, athletics, and dramatics." (p. 159)
Finally, in honor of National Poetry Month, I leave you with a poem written by Marjory Gane herself:
"Progress! thou dost elude us ever yet.
We chase with outstretched arms they dark-winged form
We grasp + think we have thee fast; look up
And still they fleeing shade is far before
Soaring beyond the spot we gained in hope
But vain, of thine embrace -
-
Despairing thy pursuit, we sink, outdone
And stupid, watch the spot
Where last thous gleamed
When lo, we see thee rise again;
Again thy inspiration draws us stumbling on.
Then thou dost turn; swift comest thou to meet us
And, Prize of life, art ours - "
Here's to the continued "progress" on the College Women Project!
References
Correspondence from Marjory Gane (class of 1901) to her family, Apr 25, 1900. Record Group 80.02: Class of 1901, College Archives, Smith College, Northampton, Mass. [DOI].
Correspondence from Marjory Gane (class of 1901) to her family, Apr 29, 1900. Record Group 80.02: Class of 1901, College Archives, Smith College, Northampton, Mass. [DOI].
Clarke, Elizabeth Lawrence (1923). Student Life. (from Seelye, L. Clark (1923) The Early History of Smith College: 1871-1910. Boston and New York: Houghton Mifflin Company.)
Seelye, L. Clark (1923). The Early History of Smith College: 1871-1910. Boston and New York: Houghton Mifflin Company.
Horowitz, Helen Lefkowitz (1984). Alma Mater. New York: Alfred A. Knopf, Inc.